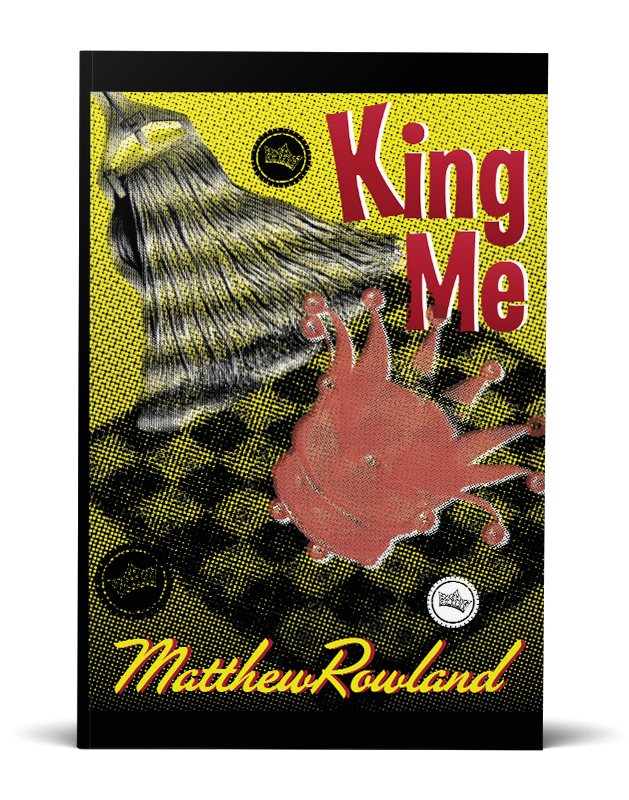 KING ME chronicles the humorous adventures of K Random, an overprivileged twenty-one-year-old college washout, framed for the assassination of his billionaire father because he has refused to do his duty and take over the family media empire, Random, Inc. K knows it would help to have a plan and a direction: a girlfriend would be nice, too; Anything would be better than hanging out with his clumsy imaginary friend Jerry Lewis. And when nothing much seems worth doing, fugitive from the law becomes K’s only option as he’s launched on a road trip to self-discovery full of shady characters and dubious coincidences. From the moment he steps on the gas pedal, K’s future is no longer a matter of whether he wants to be King—it’s a matter of whether he can slip out of the noose tightening around his neck and rise above the black comedic cloud hovering over him.

Veteran indie film producer Rowland adroitly taps his professional milieu for his debut novel, in which nothing is what it seems, and absolutely everyone is working an angle or has a pitch. Rowland’s gleeful, speedy prose—full of cinematic flashbacks, telling asides and casual dirty bombs—chronicles the surreal quest of K (né King Random Henry, aka “Cur”), who is framed for assassinating his big-wig Dad (aka “Railroad”). All looks black for the young orphan, who must prove his innocence to a pair of inept, ambitious FBI agents and free himself from the clutches of a comic book-style terrorist ring mysteriously known as FLAN. Everyone wants something and usually it’s K’s head. But why did K’s mom commit suicide? Did he really lose his virginity? Who is the Hispanic housekeeper? K’s nihilist pose disappears early on—along with his signature “Why Bother?” T-shirt—but his every step is dogged by a mouthy imaginary friend named Jerry Lewis. Soon things go from merely confusing to serious-silly as each page reveals more of the blackly comic tale— a literary mash-up with enough multigenerational family betrayals, vaunting ambition, hidden agendas and shady plot twists to make even Dickens blush. But that’s the book’s charm. In true La La Land fashion, King Me’s improbable climax—heavily laced with King Lear references—includes both dramatic revelations and shocking reversals, but (almost) everyone lives happily ever after.